FRANKFURT am MAIN, GERMANY, April 7, 2015 – Is thinking related to movement, such as the movement of your hand as you write? The unusual collaboration of typographer Harald Geisler, graduate of the University of Art and Design Offenbach in Germany, and dancing physicist Elizabeth Waterhouse, BA Physics from Harvard and former dancer with the internationally acclaimed Forsythe Company, plays tongue-and-cheek with this possibility by creating a font based on the handwriting of one of science’s ultimate thinkers, Albert Einstein.

During a phone interview from Geisler’s studio in Frankfurt, Geisler remarks, “Although Typography has progressed from techniques of manufacturing material letters for the printing press in the 15th century to the art of digital lettering, the assortment of handwriting fonts available today do not actually appear like genuine handwriting. If you look closely, the scripted letters are repeated without variation—nothing like the actual art of writing with a pen or pencil.” “If it were easy, everyone would do it,” adds Waterhouse.

Trained as a programmer during her studies at Harvard, Waterhouse was interested in how to create digital handwriting that was automated but still appeared “life-like.” This shoptalk was uncommon in the font industry but welcomed by Geisler. After six months studying examples of Einstein’s handwriting from documents in the Albert Einstein Archives, Geisler created a working prototype. Working with a digital pen to follow the very round and clear rhythm of Einstein’s penmanship, Geisler’s result had a pleasing and strong resemblance to Einstein’s actual handwriting.

It didn’t hurt that to begin with, Einstein’s handwriting is beautiful. Astrophysicist Phil Marshall (Kavli Institute for Particle Astrophysics and Cosmology at Stanford) has commented that this should come as no surprise, “Einstein’s equations were beautiful, so it makes sense that their presentation should be as well!”

The Albert Einstein font required official licensing. While waiting for the rights, Geisler decided to work on another font: the Sigmund Freud typeface, which was supported by the Sigmund Freud Museum Vienna and Freud Museum London. Using the crowd-funding platform Kickstarter, a successful campaign for the font raised over $25,000. International press helped bring new users to Kickstarter and spread the word about this new creation. A Wall Street Journal article declared, “For those who regret what keyboards and touch screens have done to their penmanship, typographer Harald Geisler has an answer: Sigmund Freud.”

In 2014 the Hebrew University of Jerusalem (Einstein’s Estate), represented by Corbis, accepted the proposal for an Albert Einstein™ font. The 2015 release fatefully coincides with the centennial year of the General Theory of Relativity. Geisler and Waterhouse are now launching a Kickstarter campaign to finish production of the font. While the prototype is excellent, months more of work are needed to provide the life-like variability that Waterhouse and Geisler envision. The campaign will begin on Tuesday April 14, 2015 and will run through Saturday June 13, 2015. In return for their support, contributors will not only receive pre-sale of the font at a reduced price, but they will also become an integral part of the creative process.

About Albert Einstein
Albert Einstein was born in Ulm, Germany on March 14, 1879. As a child, Einstein revealed an extraordinary curiosity for understanding the mysteries of science. In 1905, while working as a patent clerk in Bern, Switzerland, the young physicist Einstein obtained his Doctorate degree and published four of his most influential research papers, including the Special Theory of Relativity. In that, the now world famous equation “e = mc2” unlocked mysteries of the Universe theretofore unknown. Ten years later, in 1915, Einstein completed his General Theory of Relativity and in 1922 he was awarded the Nobel Prize in Physics. It also launched him to international superstardom and his name became a household word synonymous with genius all over the world. Einstein was a founder of the Hebrew University in Jerusalem and bequeathed his intellectual property to the institution upon his death in 1955. Recognized as TIME magazine’s “Person of the Century” in 1999, Einstein’s intellect, coupled with his strong passion for social justice and dedication to pacifism, left the world with infinite knowledge and the legacy of pioneering moral leadership.

ALBERT EINSTEIN and EINSTEIN are either trademarks or registered trademarks of The Hebrew University of Jerusalem. Represented exclusively by Corbis. Official licensed merchandise.

“the font is beautiful”
Rachel Feltman, The Washington Post

“Geisler and Waterhouse are really asking deeper questions about the diminishing (or evolving) role of our flawed, variable penmanship as a conduit of thought in today’s pixel-perfect landscape.”
Anne Quito, Quartz QZ Atlantic

3b. Quotes from scientists about the project

“While producing documents in Einstein’s handwriting would not alter
the quality or respectability of my own physics research,
there’s something very pleasing about representing the
universe in the same style as someone who was himself so effective at
it. It’s also just very nice handwriting, which perhaps shouldn’t come
as a surprise: Einstein’s equations were beautiful, so it makes sense that
their presentation should be as well!”

Feel free to use any of these images/ animation GIFs when writing about the Albert Einstein font project.

Download individual images or all images in one ZIP file.
If you need a higher resolution or custom images of samples please contact Harald Geisler (mail@haraldgeisler.com) 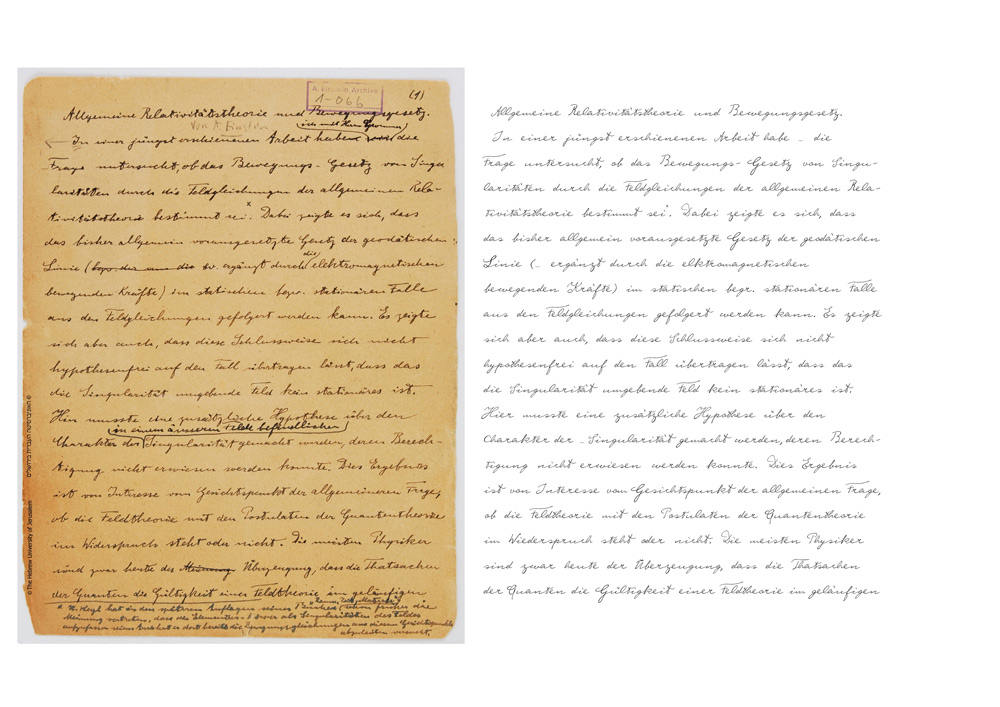 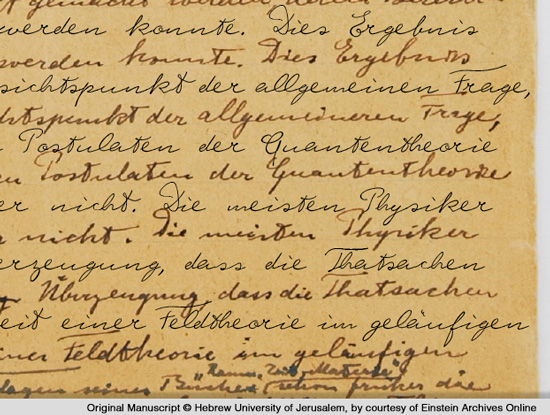 Portraits of Einstein with handwritten documents: 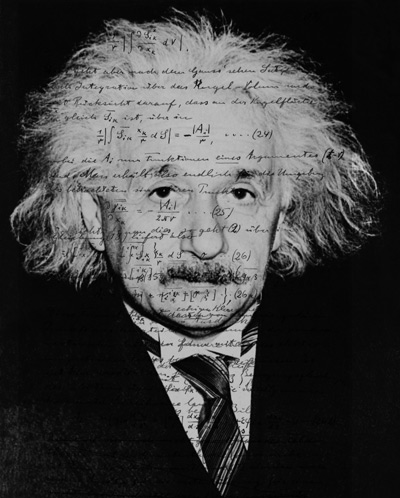 ↑ Image 1
Download high resolution image here. Or all images in one ZIP file. 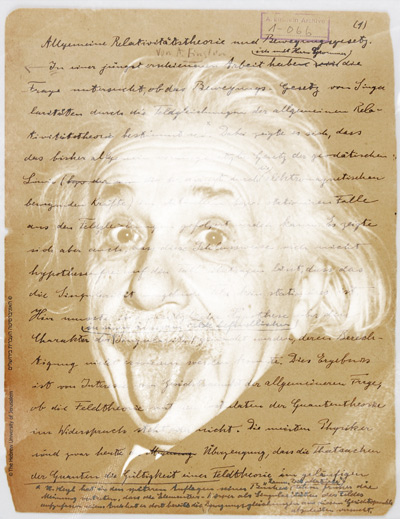 ↑ Image 2
Download high resolution image here. Or all images in one ZIP file. 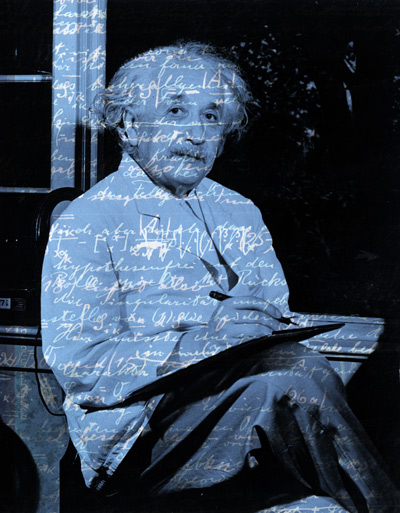 ↑ Image 3
Download high resolution image here. Or all images in one ZIP file.

Harald Geisler is a German designer with a degree in typography. His latest font design, the Sigmund Freud Typeface, became the first typeface to be featured in the Wall Street Journal. He is also the publisher of the recent reissue of the Swiss design classic “Designing Programms” by Karl Gerstner, with Lars Müller Publishers Zürich. Geisler’s projects range from font design, to book and app publishing, still life flower prints and calendars. His typographic studio is located in Frankfurt am Main, Germany.

Elizabeth Waterhouse is a dancer with a degree in physics. After graduating with a BA in Physics from Harvard she moved to Europe to dance with the internationally renowned dance ensemble The Forsythe Company, where she worked from 2004 – 2012. Waterhouse is now a PhD student working on the topic of entrainment (i.e. coordinated rhythmic activity) at the University of Bern’s Graduate School of the Arts. Her projects range from contemporary dance, to music theater, movement education and academic writing.

The concept to create a typeface of Albert Einstein’s handwriting is based on the idea of Elizabeth Waterhouse and Harald Geisler. ALBERT EINSTEIN and EINSTEIN are either trademarks or registered trademarks of The Hebrew University of Jerusalem. Represented exclusively by Corbis. Official licensed merchandise.